let’s make something together

Give us a call or drop by anytime, we endeavour to answer all enquiries within 24 hours on business days. 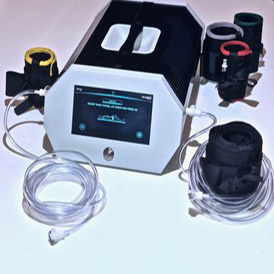 Anterior cruciate ligament (ACL) injury is one of the most common musculoskeletal (MSK) conditions worldwide. Approximately 250,000 cases per year have been identified8. Over the last number of decades, a variety of rehabilitation methods have been developed postoperatively and they have been differentiated, from an approach of minimal muscle activity and full immobilization7-9-10 towards one of increased muscle activation and range of movement (ROM) in the early stages following surgery7-9. Muscle weakness and atrophy of the quadriceps and hamstrings is a common feature in patients who have operations such as anterior cruciate ligament (ACL) reconstruction1. Furthermore, regarding the consequences of ACL surgery, either short-term or long-term, some of them are the decreased protein turnover, strength loss, muscle activation problems and an increased risk of osteoarthritis and reinjury. Muscle atrophy is unavoidable in the early postoperative stage given the reduced weight bearing and unloading context of ACL rehabilitation4. The American College of Sports Medicine recommends a minimum resistance training load of 60% to 70% of 1 repetition maximum (1 RM) to gain strength and 70% to 85% of 1 RM to achieve muscle hypertrophy. Training with these high loads may not be possible in painful early-operated knees1.

Exercise with blood flow restriction (BFR) is an efficient technique to improve muscle strength and hypertrophy in clinical populations with knee pathologies1-3-5. Specifically, BFR is an innovative training method that aims to partially restrict arterial inflow and fully restrict venous outflow in active musculature during exercise8. According to various surveys, during low-resistance exercises, reduced oxygen is delivered to muscle cells. The induced anaerobic environment has been reported to promote muscle hypertrophy by initiating cell signaling and hormonal changes that stimulate protein synthesis, proliferation of myogenic satellite cells, and preferential activation and mobilization of type II muscle fibers2-6. By using BFR as a rehabilitation tool after ACL reconstruction, it has been proven that exercises performed at lower loads (20%-50% of 1-repetition maximum) can bring muscle hypertrophy similar to traditional strengthening protocols without causing pain or straining the knee joint2.